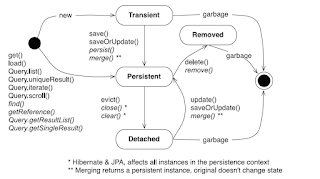 Session methods to use for object conversations

Save()
A new instance being attached to the session. An insert will be scheduled.

Update()
Call Update to make a transient object persistent again. It will force a SQL update on the transient object. This is because Hibernate does not know whether the object is dirty or not and to be safe by default schedules an update.
This method will throw an exception, if the entity is already registered with the session. - NonUniqueObjectException is thrown.

Reattaching an unmodified instance -
If you know for sure that an object is not modified and you just want to make it persistent again -
Session.lock(item, LockMode.None) or the newer way is
Session.buildLockRequest(LockMode.None).lock(entity)
Changes made before lock is called is not propogated to the database. If there are any changes made after that call, then an update will be scheduled.

The merged instance - the persistent instance is returned back, hence do not use the detached instance thereafter.

Refresh()
Hibernate will re-read the data from the database, if you believe something could have changed the state of the object in the DB.

Popular posts from this blog

April 30, 2020
I found a great article explaining Node JS internals, must read : https://www.smashingmagazine.com/2020/04/nodejs-internals/ Some other articles : Introduction to Node.js Being an official website, Node.dev explains what Node.js is, as well as its package managers, and lists web frameworks built on top of it. “ JavaScript & Node.js ”,  The Node Beginner Book This book by  Manuel Kiessling  does a fantastic job of explaining Node.js, after warning that JavaScript in the browser is not the same as the one in Node.js, even though both are written in the same language. Beginning Node.js This beginner book goes beyond an explanation of the runtime. It teaches about packages and streams and creating a web server with the Express framework. LibUV This is the official documentation of the supporting C++ code of the Node.js runtime. V8 This is the official documentation of the JavaScript engine that makes it possible to write Node.js with JavaScript.
Post a Comment
Read more

March 29, 2011
While running a code after building it using glibc, if you get this error : glibc detected : double free or corruption (fasttop) To fix this error export " MALLOC_CHECK_" environment variable  : export MALLOC_CHECK_=0 Then, try running the program. It worked in my case.
Post a Comment
Read more